There cannot be enough Armenian dancing.

Posted in Friends and Family, Nostalgia

Today I’m telling a story about Betty and Felix at The Kir Corner as part of her Proud Mommy Moments series.

I was also passed the Versatile and Kreativ Blogger Awards over at Do Sweat the Small Stuff. She had some very lovely things to say about me, for which I am very grateful. I’m not very good at passing these along, but I will ask you this:

Today, while you’re out and about in the blogosphere, leave a comment somewhere that simply appreciates the blogger–tell them why you come to read. Pass along the love. Pay it forward. For me.

I parked my Subaru in the visitor parking lot about 7pm on Thanksgiving night. I’d left my family back at my aunt and uncle’s home, dessert finished and post-dinner talk begun.

The automatic doors slid open as I entered the waiting room. The antiseptic smell of Lysol and fear was an assault on my nose after the crisp, November air outside. In my bag, with my wallet and my keys, was a small Ziploc bag of Thanksgiving turkey.

Visiting hours were over, but they let me in anyway. The level of compassion in this veterinary hospital was extraordinary. The tech led me down a series of corridors until we reached the ICU.

Rows of crates. Larger dogs on the floor level, smaller dogs and cats on the upper levels. I let my hands brush against the crate doors, whispering to the pets who peered out. I felt some guilt that there was not enough turkey for everyone.

“Hi, Sweet Boy,” I whispered. His tail thumped weakly on the blanket that lined his crate. His once fat behind was bony, his forelegs shaved from blood draws, IVs, and test sites.

But his chocolate eyes were still bright with welcome when he lifted his snout to lick my palm.

“Can I?” I asked the tech, knowing that there was no medical reason he couldn’t have the turkey. I’d asked.

I curled my body up on the floor and edged into his crate as much as I could without disturbing him. I put the pieces of turkey in my palm and offered them right up. He ate tentatively, but it was the best eating I’d seen from him since we’d had to check him in.

When he’d finished his treat, the same treat our other dog, waiting patiently and anxiously at home, would have, I laid my head on his furry chest and just breathed.

The chicken soupy smell of a retriever’s coat and his steady breathing relaxed me, and his heartbeat evened out the longer I lay there with him. Comfort was so simple to give and so easily accepted.

His name was Rumple. His papers listed his name as Rumpelstiltskin’s Gold. He’d been diagnosed with an aggressive lymphoma some months before. They gave him less than a year to live, even less than that to live well.

When he was a young dog, he would sit on his dog house like Snoopy. When he was a puppy, he ate many shoes–and a remote control. He was a beautiful boy, honey blonde and soft-mouthed. He was enthusiastic fetcher, but his best retrieving was exhibited in his games of Solo Ball. He would toss his ball with his mouth and then chase it across the yard. For long stretches of gleeful time.

He went on to live another three happy years before the cancer claimed him. He fought that disease with the optimism and good cheer that only animals have. He trusted us to make him feel better, and never judged when it didn’t work.

I parked my Volkswagen in the visitor parking lot about 7pm and met my mother in the waiting room at Tufts Animal Hospital the night we said goodbye to him. I held his paw before the staff took them back. If I hadn’t left work early and driven directly there, I would have brought him turkey in a Ziploc bag.

Other people help shape who we are through their words to us, their actions, or their lack of action. Your assignment for this week is to write about a memory of yourself WITH someone else.

This is one of those interpretive filter pieces. I wonder about the veracity of the precise dates and the chronology, but this is how I remember him, his wonderful life, and the cancer that took a good dog before his time.

Posted in Friends and Family

I had a rough day last Friday.

The kind of day that makes you call for a do-over. I’m usually miserable at work, but I fake it through the day with a little help from my friends. This day had it in for me from the get go.

So we got to lunchtime. On top of the daily shenanigans I deal with, I was tired, sick from the antibiotics I’m taking to fight the probable Lyme infection I got from a tick I’m pretty sure I picked up at my place of employment, and dealing with three children who were hell-bent on being as loud and uncooperative as possible.

And who did I take it out on? Who bore the brunt of my misery and frustration?

I lost my temper. I yelled. I made him cry.

And then I hid in the kitchen, avoiding my own poor behavior and guilt, until nap time.

A half hour later we all sat in Betty’s room, the big kids ready for their naps, watching me a little warily–was I likely to go lose it again? I was about to open a book of Frog and Toad stories when Felix hops off of Betty’s bed and hugs me, kissing me softly on my cheek.

“Does that make you feel better, Mama?” he says.

Then he stands up, takes my face in his hands and looks me in the eyes. “I love you.”

I held onto him like a drowning person. This little person, this boy, my son, simply amazes me. So I let all the awful stuff go. In that sweet moment, I let it go.

Posted in Being the Nanny, Parenting

A few weeks ago, I won the “What Is David Hyde Pierce thinking?” caption contest at Best of Fates. The prize? $25 at Michael’s.

(I know, right? Winning is awesome!)

I knew exactly what I was going to get. Felix has been coveting Betty’s paints. He has an IKEA easel and tons of chalk and crayons, but we hadn’t yet ventured into painting at home.

Today, with my recently received gift card in hand, I went to Michael’s, and picked up 7 bottles of washable paint, 8 chubby brushes, and a smock. Then, because I couldn’t find them at Michael’s, I went across the road to ACMoore and bought 7 spill-proof paint pots with lids. 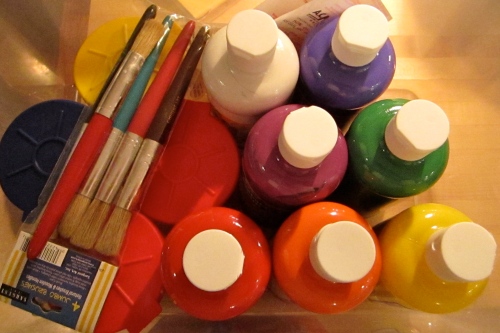 Felix was over the moon!

We set everything up, and he got to work painting me a circus. Of course.

The Wee Artist at His Work 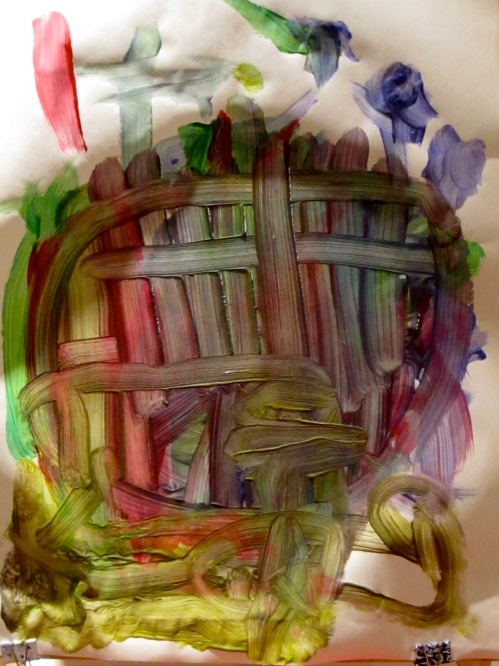 Do I Get Martha Points for Posting Wedding Photos?

Hey, check me out! I’m babysitting at In Pursuit of Martha Points today!

The smell of spring was hiding under the distinct funk of melting dirty snow this morning, and so I offer you a few photos of a very special late spring day, five and a half years ago. 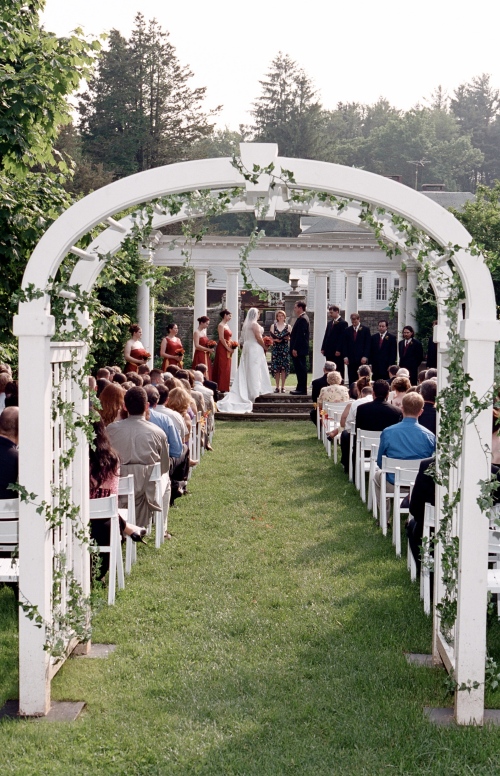 We are gathered here today... 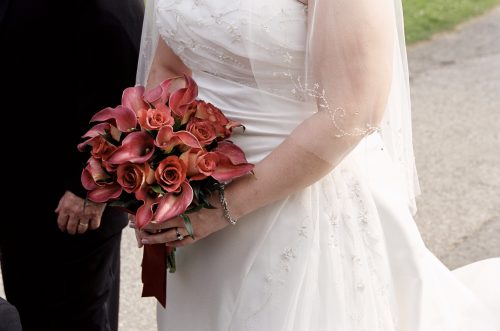 This is one of my favorite photos from the wedding, even though I'm headless. 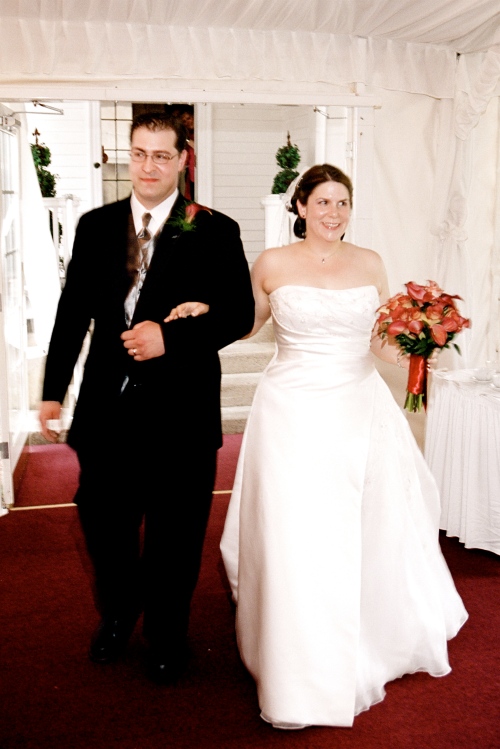 Mark, his brothers and best friends, late in the festivities.

we say I-love-you every day
who needs a Hallmark holiday?
the fourteenth can come and go

Prompt #3: A poem for my special Valentine.

How to Blow A Kiss

He blows air out in a slow, steady stream.

“What are you doing,” Mark asks him, laughter in his voice. We are all three snuggled up in the bed. It’s Wednesday, and we’re not going anywhere. Snow, sleet, freezing rain. It’s warm under the comforter. He’s perched in the valley between our hibernating forms, watching us like an expectant little bird.

“Blowing kisses,” he says. The duh is implied.

Because we know his rules for this part of the game, we “catch” our kisses, “unwrap” them, and om-nom-nom them.

“Now you,” he orders. Ah, the benevolent dictator in fleecy monster-truck pajamas.

Mwah! I kiss my hand, blow the kiss towards him.

He very slowly and deliberately blows a stream of air.

“You don’t kiss your hand first,” he explains to me, with infinite patience, as if I am the three-year old. I hear myself in his tone.

I imitate him, as does his dad.

Delighted, he “catches” both kisses, “unwraps” them gleefully, and throws his head back in joy, nomming them up.

Prompt #3: Describe the last thing that made you laugh really hard.

Not exactly guffaws, but it made us all giggle on a cold, snowy morning!

I Knew I Shouldn’t

He was having trouble sleeping.

I knew I shouldn’t give in.

Most nights, I would quietly and firmly remind him that it was bedtime, remind him of stories read and songs sung, remind him that he had all his bedfriends and his Beek, that his glowy stars were perched on his headboard, watching over him, “like the eyes a mother leaves behind to guard her children.”

I hesitated, and he took the opportunity. His voice was small in the dark.

“Please, Mama, can you rock with me in the chair?”

It was cold in his room, so we snuggled under the yellow blanket on the chair. He was warm and still, a quiet symphony of sleepy breaths, a slowing heartbeat, the little suckling noise he makes as he nuzzles Beek.

He’d taken a bath earlier, and his hair still smelled of Johnson & Johnson’s.

I knew I shouldn’t give in. He’s pushing his boundaries. An hour after bedtime, his voice hollering over the monitor like a tiny drill sergeant, “Mama! Hurry up here!” And upstairs I went, loins girded for battle with an unruly citizen.

He knows it’s past his bedtime. He knows I’m going to tuck him back in and saygoodnight without even turning on the light.

But when I arrived in his doorway, all the bluster was gone. He was my baby, sad and lonely and unable to sleep.

And I gave in, even though I knew I shouldn’t.

I am from academic chairs, from Bean Boots and Aunt Louise the Christmas cactus.

I am from the little brown Cape house, later gray, antiques and old photographs, comfortable sofas and wood fires.

I am from the brook, the ash tree with the soccer ball dangling from its dead branch.

I am from the paper crowns in Christmas crackers and dry humor, from Brown and Bock and Liston.

I am from inappropriate dinner conversations and a dark family secret aired. From three grandparents who would have loved me and a grandmother who loved me very much.

I am from lapsed Congregationalists and lost Methodists, a musty family Bible, my paternal grandmother’s confirmation corsage pressed within.

I’m from the city of commercial Valentines and Royal Corsets, the Black Forest, the Green Mountains, St. Andrews, Amsterdams old and New, macaroni and cheese and my grandmother’s gingerbread cookie recipe.

From my father, who once licked a parking meter on a winter’s day. His grandmother yanked him off, along with the skin of his tongue. My mother, who tried to flush her baby sister down the toilet.

I am from cemeteries and my mother’s writing desk, shoe boxes and storage containers in the crawl space behind my parents’ bed, photographs and news clippings, letters and genealogy charts.

This post is a response to a Red Dress Club prompt from months ago, titled “Where I’m From”, but I only found the words to finish it now, as the year is both ending and beginning. So here it is, a view of myself as the year turns.