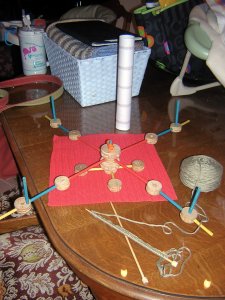 This weekend, I tried a few new tricks in the knitting department.

I’ve been reading about how to make a yarn swift out of Tinkertoys, and I picked up a used set of Tinkertoys on Ebay a while back. This weekend I finally had a need for my new swift. I deviated a little from the original design, but the concept is the same. Now, with skein at the ready, I thought, “wouldn’t it be nice to have one of those nice yummy yarn cakes that don’t move around while you’re knitting from them…”

So, I pottered around the internets until I found a guy who gave instructions for using a paper towel roll as a nostepinne.

After a little fiddling, I used the pictured swift and “nostepinne” to make that cute little yarn cake from which I’ve cast on a new project. Hooray, no more tanlged skeins.

This entry was posted in Knitting. Bookmark the permalink.